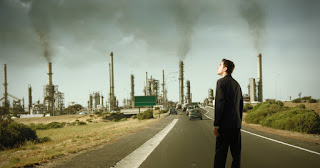 That we know global warming is our doing should be a comfort, not a cause for despair, however incomprehensively large and complicated we find the processes that have brought it into being; that we know we are, ourselves, responsible for all of its punishing effects should be empowering, and not just perversely. Global warming is, after all, a human invention. And the flip side of our real-time guilt is that we remain in command. No matter how out-of-control the climate system seems—with its roiling typhoons, unprecedented famines and heat waves, refugee crises and climate conflicts—we are all its authors. And still writing.
Wallace-Wells, David. The Uninhabitable Earth (p. 30). Crown/Archetype. Kindle Edition.

Denial is not a river in Egypt. It is the default position for many humans who like the three monkeys, see no evil, hear no evil, and do not talk about evil.

As human beings we are being called to take responsibility and rather than deny that we have any, we would be better off and more honest to admit that we not only have responsibility but that we should take it.

Unitarian Universalists covenant together to affirm and promote respect for the interdependent web. This is the seventh UU principle and yet it is often nor fully understood and marginalized in favor of other social justice causes and concerns. While other social justice concerns may be worthwhile and legitimate, without a healthy, livable climate, nothing else much matters. Other issues become moot.

If we are to deal with first things first, climate justice should be at the top of everyone's social justice priority list. Climate justice has huge ramifications not just for the eco-systems of our planet but for other social justice issues as well which pale in comparison.

If we are to take more responsibility for climate justice what might we do?