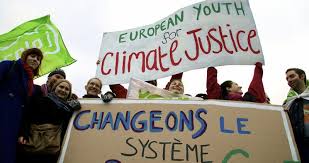 For centuries we have looked to nature as a mirror onto which to first project, then observe, ourselves. But what is the moral?

There is nothing to learn from global warming, because we do not have the time, or the distance, to contemplate its lessons; we are after all not merely telling the story but living it. That is, trying to; the threat is immense.

One 2018 paper sketches the math in horrifying detail. In the journal Nature Climate Change, a team led by Drew Shindell tried to quantify the suffering that would be avoided if warming was kept to 1.5 degrees, rather than 2 degrees—in other words, how much additional suffering would result from just that additional half-degree of warming.

Their answer: 150 million more people would die from air pollution alone in a 2-degree warmer world than in a 1.5-degree warmer one. Later that year, the IPCC raised the stakes further: in the gap between 1.5 degrees and 2, it said, hundreds of millions of lives were at stake.

Unitarian Univeralists covenant together to affirm and promote justice, equity, and compassion in human relations, but the immense threat of global warming due to carbon emissions is ignored because the consequences of our current policies and practices are so immense that we engage in denial and minimization in order to continue to function in our daily lives.

We have yet to be able to get the enormity of the consequences of these climate changes into perspective. We have things to do and other things to occupy our attention like political scandals, sports, internet social media, etc.

UUs as a people of faith can be the salt of the earth and the light of the world. We can educate ourselves and others and advocate for policies and practices that mitigate the immense consequences of what we have done.

How important an issue is climate justice when you make a decision to vote for policy makers at all levels of government? How much of your time and energy have you invested in organizing others to advocate for a change in climate justice policies? How do you affirm and promote our seventh principle, the respect for the interdependent web?
Posted by David G. Markham at 11:10 AM