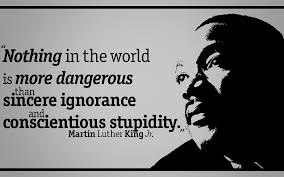 Religious ignorance was also rife after 9/11 in Washington DC, where, I soon learned to my dismay, hardly anyone spoke Arabic or understood the basics of Islam. And so the nation was treated for months to theology by sound bite.

“Islam is peace,” President Bush stated repeatedly, as if that mantra were all Americans needed to know about the Islamic tradition.

Meanwhile, the televangelist Jerry Falwell denounced Muhammad as “a terrorist,” and Paul Weyrich and William Lind, prominent voices in American conservatism, called Islam “a religion of war.”3 Who was right?

Unfortunately, Americans had no way to judge, because, when it comes to understanding the Islamic tradition, most Americans are kindergarteners at best.

When religious illiteracy is dangerous is when Americans who are thought to be knowledgable particpants in their government know nothing about world religions and their ignorance is used as a weapon against them by authorities who would manipulate them in cooperating with self serving and dysfunctional policies.

Most Americans know nothing about Islam, wouldn't know a Shite from a Sunni and yet support a trillion dollar war with their tax dollars against middle eastern countries. Is this kind of ignorance a sin?

So many times people say, "If I knew then what I know now, I wouldn't have done it." The questions of course are "Why didn't you know?" "Should you have known?"

Americans have a responsibility as participants in their governmental operations, if by doing nothing more than voting, to know what they are doing. Is ignorance an excuse for consenting and supporting evil?

Consent, to be legitimate, needs to be informed. Consent and informed consent are often two different things. It is easy to manipulate ignorant people into giving consent for things they no nothing about. Who bears the bigger responsibility, the manipulator or the manipulated? This of course is an unfair dichotomy, because they both do.
Posted by David G. Markham at 10:00 AM