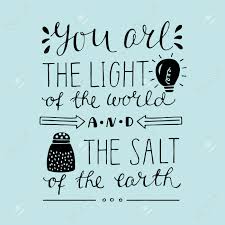 13 “You are the salt of the earth. But if the salt loses its saltiness, how can it be made salty again? It is no longer good for anything, except to be thrown out and trampled underfoot.
14 “You are the light of the world. A town built on a hill cannot be hidden. 15 Neither do people light a lamp and put it under a bowl. Instead they put it on its stand, and it gives light to everyone in the house. 16 In the same way, let your light shine before others, that they may see your good deeds and glorify your Father in heaven.
As a Roman Catholic Unitarian Universalist I take Jesus' words as reported in Matthew 5 seriously, maybe more seriously than other UUs.
UUs don't like to proselytize. They don't put an emphasis on sharing their faith the way other more evangelical denominations do. Why they prefer to keep their faith to themselves and not make an effort to share it, seems a bit of a puzzle.
One of the primary reasons, perhaps, for the lack of evangelization by UUs is that they don't understand their faith, themselves. Most UUs seem to be in a muddle. They have little conceptual understanding of their faith and so they have difficulty sharing it in a coherent way with others.
Part of this muddle is the result of the lack of training in the basic principles of Unitarian Universalism and an understanding of the six sources. UUs seem more interested in coffee and donuts and social action than a deeper spiritual understanding of their faith.
The salt of Unitarian Universalism has lost its saltiness and so what is it good for other than to be thrown out and trampled under foot? UUs are too worried about being politically correct and not offending anyone that they have  become conflict avoidant until the pressure of disagreement becomes so great that schism occurs. UUs would rather leave the denomination than rectify the errors which often confound and beleagure it.
Due to the muddle of Unitarian Universalism, there is little light to share among the nations. Occasionally there is a glimmer, but it is quickly extinguished and overcome by darkness. From what can the light of the faith emanate when the faith itself is so murky?
And so, perhaps, it is time for a revitalization of the UU faith when a sense of mission and vision and values are rejuvenated and a fire is created to warm humanity in its glow. Perhaps Unitarian Universalism needs to return to its foundational principles and teach its members what they are and how to share them with the world. Unitarian Universalists believe in the Unconditional Love of God and its inclusion of all humankind and all of life on this planet. UUs need to be more vigorous in sharing their principles with the world.
If the understanding of your faith is clear to you, go forth and share it, and salt the earth, and beam the light.