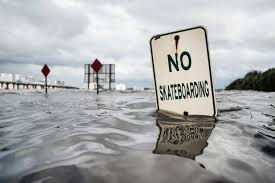 The moral responsibility of climate change is much murkier. Global warming isn’t something that might happen, should several people make some profoundly shortsighted calculations; it is something that is already happening, everywhere, and without anything like direct supervisors. Nuclear Armageddon, in theory, has a few dozen authors; climate catastrophe has billions of them, with responsibility distended over time and extended across much of the planet. This is not to say it is distributed evenly: though climate change will be given its ultimate dimensions by the course of industrialization in the developing world, at present the world’s wealthy possess the lion’s share of guilt—the richest 10 percent producing half of all emissions. This distribution tracks closely with global income inequality, which is one reason that many on the Left point to the all-encompassing system, saying that industrial capitalism is to blame. It is. But saying so does not name an antagonist; it names a toxic investment vehicle with most of the world as stakeholders, many of whom eagerly bought in. And who in fact quite enjoy their present way of life.

What it comes to the apocalypse of climate change who is responsible, who can we blame? As the old Pogo comic strip memorably said, “We have seen the enemy and it is us.”

If you enjoy a twenty first century first world lifestyle you are guilty of emitting carbon emissions which has contributed to the warming of the planet. It is easy to blame the 1% who have marketed fossil fuels and gotten rich off of them but suppliers need customers, and corporations need stockholders, and the whole population benefits from carbon emissions by driving to the mall and enjoying the air conditioned comfort on a 95 degree day.

And so projecting guilt doesn’t work to ameliorate the problem. Instead, we need to get smart and analyze the systems that we participate in and how we can intervene to change these systems so that they are designed and operated to benefit the ecosystem which we inhabit and not destroy it. This intervention will involve a change in the economic and lifestyle incentives which will cause some conflict because change is not desired by everyone. Change disturbes the status quo. Change upsets the apple cart, it goes against the grain, it has a destabilizing impact on the system whose current beneficiaries have a vested interest in maintaining.

Will people embrace the necessary changes or avoid them or resist them or obstruct them? Probably a little of all four, but change is evitable while progress is optional. We will either continue to foul our nest and eliminate the lives of many species or we will embrace change and not only survive but thrive.

Unitarian Univeralists covenant together to affirm and promote respect for the interdependent web of existence, and justice, equity, and compassion in human relations.