Lenten Reflections, Day Nineteen, Third Sunday Of Lent, Is there a better way to live life? 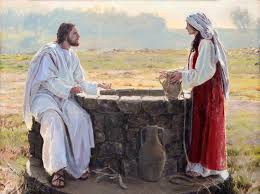 Day Nineteen, Third Sunday Of Lent
Is there a better way to live life?
John 4: 1 - 42
Now when Jesus learned that the Pharisees had heard, “Jesus is making and baptizing more disciples than John” although it was not Jesus himself but his disciples who baptized. He left Judea and started back to Galilee. But he had to go through Samaria.

So he came to a Samaritan city called Sychar, near the plot of ground that Jacob had given to his son Joseph. Jacob's well was there, and Jesus, tired out by his journey, was sitting by the well. It was about noon. A Samaritan woman came to draw water, and Jesus said to her, “Give me a drink.” ( His disciples had gone to the city to buy food.)

The Samaritan woman said to him, “How is it that you, a Jew, ask a drink of me, a woman of Samaria?” (Jews do not share things in common with Samaritans.)

Jesus answered her, “If you knew the gift of God, and who it is that is saying to you, ‘Give me a drink,’ you would have asked him, and he would have given you living water.”

The woman said to him, “Sir, you have no bucket, and the well is deep. Where do you get that living water? Are you greater than our ancestor Jacob, who gave us the well, and with his sons and his flocks drank from it?”

The woman said to him, “Sir, give me this water, so that I may never be thirsty or have to keep coming here to draw water.”

Jesus said to her, “Go, call your husband, and come back.”

The woman answered him, “I have no husband.”

Jesus said to her, “You are right in saying, ‘I have no husband’; for you have had five husbands, and the one you have now is not your husband. What you have said is true!”

The woman said to him, “Sir, I see that you are a prophet. Our ancestors worshiped on this mountain, but you say that the place where people must worship is in Jerusalem.”

Jesus said to her, “Woman, believe me, the hour is coming when you will worship the Father neither on this mountain nor in Jerusalem. You worship what you do not know; we worship what we know, for salvation is from the Jews. But the hour is coming, and is now here, when the true worshipers will worship the Father in spirit and truth, for the Father seeks such as these to worship him. God is spirit, and those who worship him must worship in spirit and truth.”

The woman said to him, “I know that Messiah is coming” (who is called Christ). “When he comes, he will proclaim all things to us.”

Jesus said to her, “I am he, the one who is speaking to you.”

Just then his disciples came. They were astonished that he was speaking with a woman, but no one said, “What do you want?” or, “Why are you speaking with her?”

Then the woman left her water jar and went back to the city. She said to the people, “ Come and see a man who told me everything I have ever done! He cannot be the Messiah, can he?”

They left the city and were on their way to him.

Meanwhile the disciples were urging him, “Rabbi, eat something.” But he said to them, “I have food to eat that you do not know about.”

So the disciples said to one another, “Surely no one has brought him something to eat?”

Jesus said to them, “My food is to do the will of him who sent me and to complete his work. Do you not say, ‘Four months more, then comes the harvest’? But I tell you, look around you, and see how the fields are ripe for harvesting. The reaper is already receiving wages and is gathering fruit for eternal life, so that sower and reaper may rejoice together. For here the saying holds true, ‘One sows and another reaps.’ I sent you to reap that for which you did not labor. Others have labored, and you have entered into their labor.”

Many Samaritans from that city believed in him because of the woman's testimony, “He told me everything I have ever done.” So when the Samaritans came to him, they asked him to stay with them; and he stayed there two days. And many more believed because of his word. They said to the woman, “It is no longer because of what you said that we believe, for we have heard for ourselves, and we know that this is truly the Savior of the world.”

There are many interesting observations that could be made based on this story.

Jesus tells her that He doesn’t care that she has had five husbands and now is alone. He implies that these demographic facts are not important. It is her spirit which is important to Him and that He loves her (agape.) She realizes that Jesus is on to something and becomes excited and leaves what she is doing to share what she has learned with others.

When others hear her story of this marvelous person, they don’t know whether to believe her or not so they check it out for themselves and they also fall in Love and ask Jesus to stay with them and He does for a couple of days.

Meanwhile, the disciples seem clueless. All they seem to care about is whether Jesus ate or not. He tells them He’s not hungry and He’s got better things to do at the moment than eat. He is making people aware of their holiness which is so satisfying and fulfilling for Him than food almost seems a nuisance.

When people are in love they often forget to eat and find it easy to lose weight if they need to. Love does rearrange our priorities. Things of the physical world of the ego become much less important as we experience and enjoy another state of consciousness.

In the last analysis how important are the things that we use to separate and divide ourselves from one another? Jesus unifies people and erases artificial divisions of the ego. People are uplifted to a different and better place when they experience His consciousness and state of being. It is during this time of Lent that we become aware that there is a better way to live our lives. This story about Jesus and the Samaritans is a great example which we can emulate.

For a video commentary which lasts about 8 minutes click here.