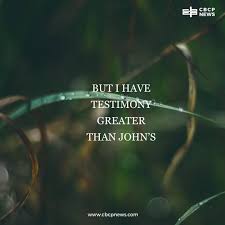 John 5: 31-47
“If I testify about myself, my testimony is not true. There is another who testifies on my behalf, and I know that his testimony to me is true.

You sent messengers to John, and he testified to the truth. Not that I accept such human testimony, but I say these things so that you may be saved. He was a burning and shining lamp, and you were willing to rejoice for a while in his light.

You search the scriptures because you think that in them you have eternal life; and it is they that testify on my behalf. Yet you refuse to come to me to have life.

I do not accept glory from human beings. But I know that you do not have the love of God in you. I have come in my Father's name, and you do not accept me; if another comes in his own name, you will accept him.

How can you believe when you accept glory from one another and do not seek the glory that comes from the one who alone is God? Do not think that I will accuse you before the Father; your accuser is Moses, on whom you have set your hope. If you believed Moses, you would believe me, for he wrote about me. But if you do not believe what he wrote, how will you believe what I say?”

In the very first sentence, Jesus tells the audience that His life, His story, HIs teachings are not about HIm. They need to get this. He is not blowing his own horn.

Jesus laughs and jokes and says to them, you thought John the Baptist was a big deal and you raved about him for a while, but what I am telling you is far more important and wonderful than what John ever taught. However, hold your applause and your adulation because I’m not telling you things for my own benefit but for the glory of the God of which you seem to know nothing.

Jesus laughs further at their looking for God in their holy books. Jesus is telling them that looking in their scriptures is a waste of time. God is in their own hearts and minds not in some book. Jesus is telling them what the Buddhists teach that instead of looking at the finger pointing at the moon, look at the moon. Holiness is not to be found in texts and creeds but in experience of love in one’s own heart and relationships.

At the end of the passage, Jesus seems sad. He tells His audience they have missed the boat. They do not understand what he is teaching. They listen to each other and look for peer recognition and acknowledgement but God is not to be found in the things of the ego. They have to rise above this human reinforcement and regard, and seek the Oneness of the Divine which is beyond any human specialness of kudos..

During Lent we are supposed to be giving things up. It is a good time to renounce the things of the ego like good grades, certificates, “atta boys,” and “atta girls.” Seekers on the right track are looking for something much higher and deeper (notice the paradox?) and eschew ego reward for the true satisfaction and fulfillment of experience and awareness of one’s holiness. It is this awareness that Jesus attempts to make us aware. Unfortunately, most people don’t get it.