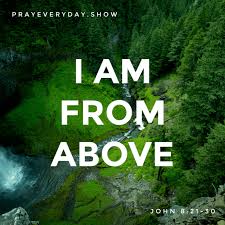 Day Thirty five, Fifth Tuesday of Lent
Embarking on the path to peace and bliss.

Again he said to them, “I am going away, and you will search for me, but you will die in your sin. Where I am going, you cannot come.”

Then the Jews said, “Is he going to kill himself? Is that what he means by saying, ‘Where I am going, you cannot come’?”
He said to them, “You are from below, I am from above; you are of this world, I am not of this world. I told you that you would die in your sins, for you will die in your sins unless you believe that I am he.”

Jesus said to them, “Why do I speak to you at all? I have much to say about you and much to condemn; but the one who sent me is true, and I declare to the world what I have heard from him.”

They did not understand that he was speaking to them about the Father. So Jesus said, “When you have lifted up the Son of Man, then you will realize that I am he, and that I do nothing on my own, but I speak these things as the Father instructed me. And the one who sent me is with me; he has not left me alone, for I always do what is pleasing to him.”

As he was saying these things, many believed in him.

John describes Jesus’ interaction with the group around him and they didn’t understand what Jesus was trying to communicate with them  any more than most people understand it now.

Jesus then tells them, “I don’t say these things from my ego. I am telling you this because I have become aware of the Oneness of God and you are part of the Oneness too if only you would give up your egos and realize it. You keep searching on the path of the ego for the things that will make you happy, but it never works. You could find what you are looking for if you joined Me on the path of the Spirit.”

The very idea of giving up the ego, the idea of an individual, separate self, fills people with fear and dread, and yet overcoming this fear and moving in this direction is to finally be on the path to peace and bliss.