Lenten Reflections, Day Thirty one, Fifth Friday Of Lent, You can kill the body but not the soul. 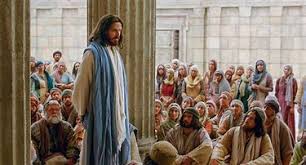 Day Thirty one, Fifth Friday of Lent
You can kill the body but not the spirit.

After this Jesus went about in Galilee. He did not wish to go about in Judea because the Jews were looking for an opportunity to kill him. Now the Jewish festival of Booths was near. So his brothers said to him, “Leave here and go to Judea so that your disciples also may see the works you are doing; for no one who wants to be widely known acts in secret. If you do these things, show yourself to the world.” ( For not even his brothers believed in him.)

Jesus said to them, “My time has not yet come, but your time is always here. The world cannot hate you, but it hates me because I testify against it that its works are evil. Go to the festival yourselves. I am not going to this festival, for my time has not yet fully come.”

After saying this, he remained in Galilee. But after his brothers had gone to the festival, then he also went, not publicly but as it were in secret.

The Jews were looking for him at the festival and saying, “Where is he?”

About the middle of the festival Jesus went up into the temple and began to teach. The Jews were astonished at it, saying, “How does this man have such learning,  when he has never been taught?”

Then Jesus answered them, “My teaching is not mine but his who sent me. Anyone who resolves to do the will of God will know whether the teaching is from God or whether I am speaking on my own. Those who speak on their own seek their own glory; but the one who seeks the glory of him who sent him is true, and there is nothing false in him. Did not Moses give you the law? Yet none of you keeps the law. Why are you looking for an opportunity to kill me?”

The crowd answered, “You have a demon! Who is trying to kill you?”

Jesus answered them, “I performed one work, and all of you are astonished. Moses gave you circumcision (it is, of course, not from Moses, but from the patriarchs), and you circumcise a man on the sabbath. If a man receives circumcision on the sabbath in order that the law of Moses may not be broken, are you angry with me because I healed a man's whole body on the sabbath? Do not judge by appearances, but judge with right judgment.”

Now some of the people of Jerusalem were saying, “Is not this the man whom they are trying to kill? And here he is, speaking openly, but they say nothing to him! Can it be that the authorities really know that this is the Messiah? Yet we know where this man is from; but when the Messiah comes, no one will know where he is from.”

Then Jesus cried out as he was teaching in the temple, “You know me, and you know where I am from. I have not come on my own. But the one who sent me is true, and you do not know him. I know him, because I am from him, and he sent me.”

Then they tried to arrest him, but no one laid hands on him, because his hour had not yet come. Yet many in the crowd believed in him and were saying, “When the Messiah comes, will he do more signs than this man has done?”

Jesus knows His days are numbered. He knows He has been rocking the boat, going against the grain, upsetting the apple care, disturbing the status quo. The authorities feel threatened and want to squelch Him by killing HIm.

It seems that some of the group is for HIm and others are against Him. Because of this Jesus at first goes about secretly but then, apparently, changes His mind and starts teaching in the Temple, and the folks there are amazed at what comes out of His mouth.

Jesus tells them, your amazement at what I have to say has nothing to do with me. What I am saying is based on my awareness of the cosmic consciousness. Jesus is sharing His metaphysical understanding of the source of His knowledge and experience.

Some of the people in His audience say that He is crazy, “You have a demon!” Others seem enthralled and wonder if He is the promised messiah they all have been waiting for.

Jesus is careful about who and when and where He shares His spiritual understanding and for the time being, the majority of the crowd tolerates HIm, but Jesus knows it is only a matter of time before they try to silence HIm by killing His body.