Lenten Reflections, Second Sunday of Lent, Experiencing the world of the Spirit. 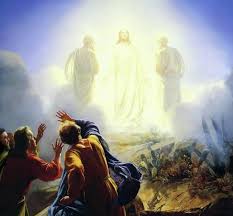 Day Twelve, Second Sunday of Lent
Experiencing the world of Spirit.
Luke 9: 28 - 36
28Now about eight days after these sayings Jesusa took with him Peter and John and James, and went up on the mountain to pray. And while he was praying, the appearance of his face changed, and his clothes became dazzling white. Suddenly they saw two men, Moses and Elijah, talking to him. They appeared in glory and were speaking of his departure, which he was about to accomplish at Jerusalem. Now Peter and his companions were weighed down with sleep; but since they had stayed awake,  they saw his glory and the two men who stood with him. Just as they were leaving him, Peter said to Jesus, “Master, it is good for us to be here; let us make three dwellings,  one for you, one for Moses, and one for Elijah”— not knowing what he said. While he was saying this, a cloud came and overshadowed them; and they were terrified as they entered the cloud. Then from the cloud came a voice that said, “This is my Son, my Chosen; a listen to him!” 36 When the voice had spoken, Jesus was found alone. And they kept silent and in those days told no one any of the things they had seen.

Peter had an enlightenment experience. He experienced Jesus not as a body but as Spirit.

Peter liked it. Peter wanted to stay in the physical space and camp out. But as he was overwhelmed further by the spiritual experience, he at first was terrified having to give up his ego, but as Peter understood the experience as cosmic consciousness, an enlightenment experience, he was at a loss for words. Peter couldn’t describe what had happened to him. Peter wasn’t keeping secrets, he just couldn’t find the words or metaphors to communicate to others trapped in the ego world what he had experienced in the Spirit world.

Peter’s experience is very similar to Plato’s allegory of the cave where one of the prisoners who has spent his life watching the shadows on the wall, finally escapes the cave and becomes aware of a whole different world. This person returns to the cave and tries to explain to his former companions what he has witnessed and experienced, and they have no idea what he is trying to describe, and scoff at him as if they think he is mentally ill.

Peter’s experience is indescribable. The Tao Te Ching starts off with the verse, “The Tao that can be described is not the real Tao.” The teachings of Jesus that can be described are not the real teachings. Jesus is one with the Father and Jesus tried to tell people that they are one with the same Father, too. Most people think Jesus is nuts and dismiss Him and in the end support His execution.