By their fruit you will know them 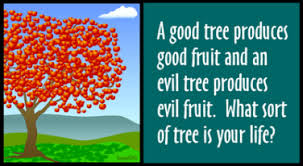 From the president came willful blindness, scapegoating, boasts, and lies. From his mouthpieces, conspiracy theories and miracle cures. A few senators and corporate executives acted quickly—not to prevent the coming disaster, but to profit from it. When a government doctor tried to warn the public of the danger, the White House took the mic and politicized the message.
George Packer, “Underlying Conditions,” Atlantic, June, 2020

Not since the prosecution of immoral wars based on bogus claims of "weapons of mass destruction" and war crimes such as  torture and indefinite incarceration without due process in Guantanamo, the United States has  seen such immoral behavor in its Federal government.

Even more immoral has been the political and public support which has enabled the U.S government rendering all the American people guilty off aiding and abetting unethical, immoral, and illegal behavior.

The United States is no longer a self governing nation based on the rule of law. U.S. values and principles have been sabotaged and corrupted insidiously by people motivated by money, power, special interest, and status. The social contract has become so unjust, illicit, and corrupted that most Americans and other peoples around the world no longer recognize the people the American people claim to be and have been in the past.

In some instances religious groups have supported and promoted such leadership in return for support for parochial values and preferences rather than the common good.

And so, spiritual people are left with lawless and immoral communities in which they are living like the yeast in the dough, the salt of the earth, the light on the hill.

Now more than ever before, spiritual people need to articulate their values and work for systems that support lawfulness, justice, equity, and peace among all people.

President Trump has declared churches "essential businesses" so that their members can congregate, infect each other, spread the virus, and kill each other and their loved ones. Perhaps this is social darwinism at its best. Jesus said, "By their fruit, you will know them." The Trump supporters and enablers will die off and their charming and manipulative leader will be voted out of office because of the immoral acts which have caused such suffering and death. Indeed, by their fruit you will know them.