The Spiritual Life, Topic Twenty six, The freedom to be who you are. 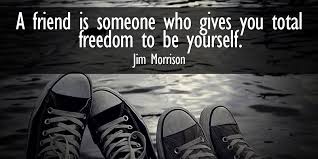 The Spiritual Life, Topic Twenty six
The Freedom to be who you are.

The moment you depend, you start feeling miserable because dependence is slavery. Then you start taking revenge in subtle ways, because the person you have to depend upon becomes powerful over you. Nobody likes anybody to be powerful over them, nobody likes to be dependent because dependence kills freedom. And love cannot flower in dependence—love is a flower of freedom; it needs space, it needs absolute space. The other has not to interfere with it. It is very delicate.

When you are dependent the other will certainly dominate you, and you will try to dominate the other. That’s the fight that goes on between so-called lovers. They are intimate enemies, continually fighting. Husbands and wives—what are they doing? Loving is very rare; fighting is the rule, loving is an exception. And in every way they try to dominate—even through love they try to dominate. If the husband asks the wife, the wife refuses, she is reluctant. She is very miserly: she gives but very reluctantly, she wants you to wag your tail around her. And so is the case with the husband. When the wife is in need and asks him, the husband says that he is tired. In the office there was too much work, he is really overworked, and he would like to go to sleep.

Osho. Maturity: The Responsibility of Being Oneself (Osho Insights for a New Way of Living) . St. Martin's Press. P. 54

The fear of domination begins in childhood when the child says defiantly, “You’re not the boss of me!” and so it goes on throughout our lives in the world of the ego.

As the philosopher, Isaiah Berlin, has pointed out, there are two kinds of freedom: freedom from and freedom to. In many instances in order for there to be freedom to, there must be freedom from. Unconditional love only works with freedom from. There is no possession, no domination, no control issues, no power struggles.

The first step in embarking on a path of Unconditional love is to give up control, give up attempts to make the loved one do anything, and give the gift of freedom, the space to be one’s self. This is scary especially if the loved one is likely to make mistakes that have negative consequences. A warning is enough, but then the tongue must be bitten. Mistakes can, sometimes, be the best teacher. People don’t learn from words unless they are desired and willingly received. Most often people learn from consequences.

It is in freedom from our dominating, and controlling, and possessiveness that we put our faith. We give up the illusion of making anybody do anything. As they say in Twelve step programs, “You take your own inventory, don’t be taking everyone else’s.” And so we surrender our desire to control and give the other person the freedom to be who they are.

Email ThisBlogThis!Share to TwitterShare to FacebookShare to Pinterest
Labels: The Spiritual Life series