Explaining things to kids - Keeping that faith when "Haters gonna hate us." 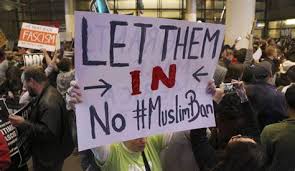 THE DAY AFTER THE PRESIDENTIAL ELECTION, MY FOURTEEN-YEAR-OLD son left a message in the shower. With his little brother’s foam alphabet letters, he spelled out, “Haters gonna hate us.”

It was the “us” that transformed the popular catchphrase into something troubling. I knew that the rhetoric of this election cycle had affected my children, but here it was spelled out so clearly. My son felt the vitriol towards Muslims directed at him.

Over the course of the week, my daughter would ask if we were going to be banned from the country, pleading after my every reassurance, “But how do you know?” My five-year-old son asked if Trump would break our family. When I answered that as president, Trump would learn to be nice, he ran to share this news with his older siblings, his little feet light with relief.

How Do I Explain This to My Kids? . The New Press. Kindle Edition.

This mother’s hope that “Trump would learn to be nice” hasn’t happened over 3 ½ years. If anything Trump and the Trumpists have gotten worse. New words have entered our everyday discourse like “doubling down” and “tripling down.”

With children taken from their parents in the thousands, and unmarked soldiers in the streets beating and kidnapping protesters, what is a parent to say to their children about what their federal government has become?

The fourteen year old boy who wrote “Haters gonna hate us” after Trump’s election has turned out to have made an accurate prediction.

John Lewis knew the haters very well and stood up to them with courage, love, and determination to advocate for change. John Lewis has encouraged us, in his deathbed letter and throughout his life,  to continue to work for justice and the creation of the beloved community. The beloved community is described in our UU sixth principle as a world community with peace, liberty, and justice for all.

What is a parent to say to children about “haters gonna hate us?” A good parent should validate their children’s perceptions and say, “Yes they are. They elected Donald Trump to be their leader in their hating, and we will stand up to them and tell them they are wrong, We have every much a right to be here as they do, and we will do what we can to change their hating and the things their hate makes them do.”

A good parent tells their children, “We affirm and promote the inherent worth and dignity of every person and we will continue to do so even when the majority of people in this country don’t. But we do have friends who believe as we do and they will stand with us to change the way things are done in this country and in our community. Haters are gonna hate us but we don’t hate them back. We try to understand their fears and insist that things are gonna be okay. What we have to do, children, is keep the faith and act on it.

“We need to take care of ourselves, of one another, and try to deal with their hate with understanding, courage, resistance, and love to help make the world a better place. Remember that while the haters gonna hate us, the lovers gonna love us, and we love you a whole bunch.”