Explaining things to kids, Lying or telling the truth 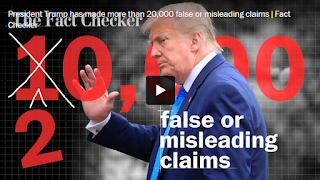 “Hey Dad I saw this thing on the Washington Post web site that the President has told 20,000 lies. He’s a billionaire and was elected President. Why do you keep telling me not to lie? How am I going to compete and get ahead in this world if I just tell the truth especially if it makes me look bad and gets me into trouble?”

“I guess if you want to lie like Donald Trump you can, son. I’m not going to tell you any more not to lie because you are right that liars can manipulate people with their deceit and get ahead in life. I wonder what kind of a life that would be never bring honest and never being able to be your real self but always a fake and foney?”

“What people don’t know can’t hurt you, dad. And if they think something about you or a situation that favors you that isn’t true, whose fault is that? As P.T. Barnum said, ‘There’s a sucker born every minute.’”

“You have to follow your own conscience son. If you think it is better to lie, then lie. Lying works for millions of people. It’s not my way though. I have never lied to you and I never will. That’s just the way I have chosen to live my life, but now it’s up to you to decide how you want to live.”

“So, if I said, Dad, that everything I say is a lie would you think that was the truth or a lie?”

“But I already told you it would be false because I am always lying.”

“Sometimes, son, the truth appears to be a lie. It depends on the depth of your understanding. People rarely say what they mean. Most people lie most of the time. The president isn’t unusual. People do it all the time. A lot of the time people even believe their own nonsense when, in fact, they have no idea what they’re talking about. As Unitarian Universalists we affirm and promote the  free and responsible search for truth and meaning. It sounds good in principle but people usually don’t pay much attention to the responsible part, So the question might be are you responsible or irresponsible instead of are you telling the truth or lying. President Trump is probably one of the most irresponsible leaders in the world. The question, son, is do you want to be responsible or irresponsible?”

“I guess I would rather be responsible so people trusted me.”

Well then it probably would be a good idea to tell the truth.”