Human Supremacy and the Seventh Principle 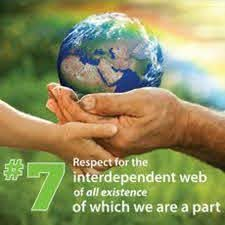 We are in the midst of the sixth extinction. It is estimated that we can lose 50 percent or more of the planet’s species in this century. Part of the reason for this rapid decline in the biodiversity on planet Earth is the overpopulation of homo sapiens who now number about 7.9 billion. The ideal number is about 2 billion according to Eileen Crist in the interview in the December, 2020 issue of the Sun Magazine entitled, “Our Great Reckoning.”

How does homo sapiens awaken from the trance of human supremacy? Human supremacy is enacted in two primary ways: the geographical takeover of the space on the planet and the disparagement of any species nonhuman and inert substances which make up the planet.

We need to recognize that homo sapiens is part of an interdependent web of existence of which we are just a tiny part. We must learn to respect this interdependent web and live in harmony with it, not dominate it and plunder it for our own selfish satisfaction.

Our Great Reckoning is an interview well worth reading and should be required of all literate people on the planet.