A Course In Miracles Workbook Lesson #146, Review of lessons 131 and 132, Cracks are where the light gets in. 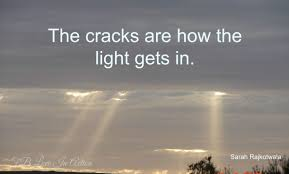 Lesson #146
Review of lessons 131 and 132
My mind holds only what I think with God.
131- No one can fail who seeks to reach the truth.
132 - I loose the world from all that I thought it was.
The mystics teach that most human beings are sleepwalking through life in a dream with its many illusions. For some, they come to a point in their life where it becomes apparent that what they have thought was true isn’t true and that there must be a better way. This revelation is what is called “the dawning.” The dawning initiates a search for the Truth but before the Truth can be found a purification is necessary, a purging of all the misperception, faulty generalizations, and mistaken beliefs.
In Alcoholics Anonymous, this dawning occurs in the first three steps when we recognized that our lives, as we have lived them in the ego world,  are unmanageable and that there is a power greater than our ego and that we would be better off if we would turn our will and our lives over to that Transcendent power. Let go and let God the slogan says.
In Unitarian Universalism, we affirm and promote the free and responsible search for Truth and meaning which we come to understand does not reside in the world of the ego but is to be found within and between. In the cracks, as Leonard Cohen sings, is where the light gets in.
Today, it is suggested that we begin and end our day, and several times in between, to take a few minutes or maybe just a moment or two and remind ourselves that no one can fail who seeks the Truth if we are willing to give up the idols of the world of the ego.
My Kind Of Church Music
Anthem by Leonard Cohen
Posted by David G. Markham at 10:40 AM