A Course In Miracles Workbook Lesson #134, Let me perceive forgiveness as it is. 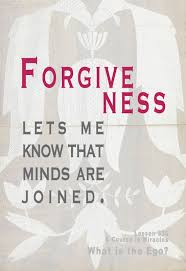 Lesson #134
Let me perceive forgiveness as it is.
The Course teaches that “forgiveness” on the path of the ego is to overlook or excuse a sin which we think is real. This is a fundamental error from the point of view from the path of the Spirit where we realize there is no sin, no guilt, no punishment. Love is Unconditional and as such there is no sin, and there are no victims, and when we become aware of this metaphysical reality there is tremendous peace and joy in the whole world of Spirit.
In Alcoholics Anonymous after we do our fearless moral inventory, report the results to another human being, make amends where it would do no further harm, we are encouraged to improve our conscious contact with the Transcendent which exists way beyond the ego world of sin, guilt, and punishment. This is the peace of recovery which comes from a forgiveness that recognizes and acknowledges that insanity is simply insanity and this is something that we not only no longer want but realize in the kingdom of God does not exist. It is stuff we just made up and mistakenly believed was real.
In Unitarian Universalism we covenant together to affirm and promote the inherent worth and dignity of every person. It is in this affirmation and promotion that we give up judgment, condemnation, assignment of guilt, and punishment. We realize that forgiveness in the world of the ego has no meaning for sin and guilt have no meaning in the face of inherent worth and dignity of the person and by extension all people including ourselves. Forgiveness for Unitarian Universalists is the willingness to give up making other people responsible for our unhappiness. UUs do not see themselves as victims but as creatures capable of extending God’s Unconditional Love to themselves and to all of humanity.
Today, it is suggested that we take fifteen minutes twice and as many times as we desire throughout the day and remind ourselves that the world of the ego wants us to believe the illusion that  sin and guilt  exist  while the world of the Spirit wants us to perceive forgiveness as it is which is to help us awaken from this illusion and share our awareness with others that sin is not real.
My Kind Of Church Music
Every Little Thing Is Gonna Be Alright, Bob Marley
Posted by David G. Markham at 9:31 AM