Stories about UU mystic, Harry Hollywood - Don't do stupid shit but if you do learn from your mistakes. 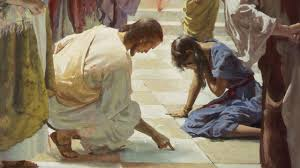 Don’t do stupid shit but if you do learn from your mistakes.
Harry was in a bar with his buddies having a couple of beers and brought up the story where the Pharisees bring the adulterous woman to Jesus and ask Him if it’s okay to stone her which is the punishment for the crime at the time.
Harry says, “Now Jesus was a funny guy. Nobody can say He didn’t have a sense of humor. The way the story is told, Jesus squatted down  started drawing in the dust. I guess He was buying time while He thought about what to say. So, Jesus finally says, ‘I’ll tell you boys what you should do.’
They wait with anticipation and excitement for a stoning and Jesus says to them. ‘Whichever one of you is without sin can cast the first stone.’
The air went out of their lungs and they groaned in disappointment and the story says that they started walking away beginning with the eldest. Now why would that be? Why the eldest first? The answer to that question can wait for another time. Suffice it to say now that they walked away one by one.
The woman looks at Jesus and says meekly thinking that her goose was cooked, ‘Where did they all go?’ and Jesus says, grinning, ‘I’ll be damned if I know.’
So the woman says to Him. ‘What should I do now?’
He says, ‘I guess you’re free to go.’
She says to Him, ‘Gee, thanks!’
He says, ‘you’re welcome. Take care. Oh, and don’t do the same shit again.’
She laughs with Him and says, ‘Not in your life.’”
“And so,” says Harry,  “There’s a moral to that story.”
The folks listening say, “Oh yeah, what is it?”
Harry says, “Don’t do stupid shit, but if you do, learn from your mistakes and don’t repeat them.”
Everyone laughed and one of the guys bought everyone another round of beers.
Posted by David G. Markham at 7:00 AM