No, the world is not going to hell in a hand basket. 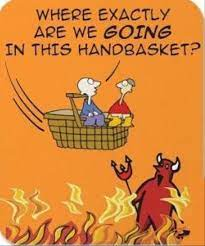 No, the world is not going to hell in a hand basket

I had a guy tell me the other day quite seriously that the world is going to hell in a handbasket. During his soliloquy he mentioned things like the increased polarization in politics, the socialists who are taking over, the Covid-19 excuse to take away people’s freedoms by making them wear masks, stay away from one another, shutting down businesses, preventing travel, etc.

The immigrants are taking over, the wall never got built, and the people who were standing up for truth, freedom, and the American way trying to prevent the theft of the election from Donald Trump are being prosecuted and punished for nothing other than being good Americans and standing up for what’s right. He went on telling me how white people are being picked on, discriminated against, and victimized.

I said, “My golly, it’s terrible. Just terrible. I don’t know how you stand it. Have you thought of leaving the country, or killing yourself, or at least arming yourself and fighting for your very survival?”

He said, “You’re one of the few people I can talk to about this stuff.”

I said, “Well, it’s on Fox news and there are websites on the internet that report this stuff.”

He said, “Yes, but not enough people listen to them.”

I said, “Well, that’s a crying shame. I wish only the best for you and people who feel as victimized and downtrodden as you do.”

“Thank you so much,” he said. “I feel a lot better. Most people don’t want to hear my thoughts and feelings. They tell me I’m crazy.”

I said, “I can see how you feel this way and think these things. These are scary times when our previous ways of life are being disrupted. This is very disconcerting, but we will see how things turn out.”

I said , “No, I don’t think things are going to hell in a hand basket. It will all work out in the end.”

Life is good; not in a hand basket on its way to hell at all..