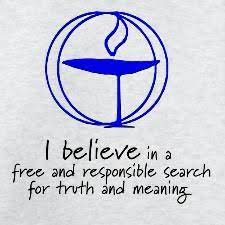 2) Human beings partake of both realms. We are not only physical but also spiritual beings. We have bodies, but we also have, at the core of our being, in the depths of our minds, a center of transcendent awareness. This center is described as pure consciousness, mind, spirit, or Self and is known by such names as the neshamah of Judaism, the soul or divine spark of Christianity, the atman of Hinduism, or the buddha nature of Buddhism. This divine spark is intimately related to—some traditions even say inseparable from and identical with—the sacred ground or foundation of all reality. We are not divorced from the sacred but eternally and intimately linked to it.

Roger Walsh teaches that there are four crucial claims in the Perennial Philosophy, the first of which is that there are two realms of reality and the second that we, as humans, partake of both realms: the profane and the sacred.

Unitarian Universalism affirms and promotes this when it holds as its fourth principle, the free and responsible search for truth and meaning. This search is engaged in in the realm of the sacred. It does this by exploring the six sources of its living tradition. Each congregation seems to find one source or another as a center of gravity for this exploration. Some congregations tend to be more Christian or Buddhist or Earth Centered or humanistic. Some dabble in all six.
One of the strengths and weaknesses of Unitarian Universalism is the eclecticism in telling its story of the sacred. It tries to be a jack of all trades while a master of none and like the Israelites of the Old Testament wander in the desert led by Moses after escaping slavery in Egypt for 40 years.
Now is the time for a recognition of a perennial philosophy which brings all the spiritual teachings of the world religions together in unified concepts and practices.
Today we recognize and acknowledge not only that there are two realms of reality which human beings experience, but that we partake in them whether we are consciously aware of it or not. We can all agree that we have Life but what the nature of this Life is is less well understood depending on many factors.
Unitarian Universalism attempts to elucidate and manage those factors so that a healing can be achieved between our separation from and rejoining with our Transcendent Source.
Posted by David G. Markham at 9:07 AM