Do you believe in God? 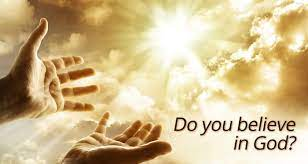 An acquaintance I would have coffee with from time to time and who seemed to be someone I'd like to become better friends with asked me, "Dave, do you believe in God?"
I said, "Depends on what God you're referring to."
He ended our conversation and never talked to me again.
Do Unitarian Universalists believe in God? Some do, some don't. Belief is God is not required for membership in a UU church whose function is to nurture the spiritual live of its members.
Believe it or not while not religious, most atheists, humanists, secularists have a spiritual life which is not dependent on any belief in a deity.
UU congregations service theists, atheists, and agnostics.
Most people do not make a distinction between religion and spirituality. Some religious people may or may not be spiritual, and some spiritual people may or may not be religious. Spirituality and religion can overlap but they can also be entirely different things.
Do you, or people you know, have a spiritual life but don't identify with any particular religion? If so, what is their spiritual life like and how do they nurture it?
Posted by David G. Markham at 11:52 AM