Steve McIntosh’s book, The Presence Of The Infinite was published in 2015. This is the image that appears in the book depicting the percentages of Americans at each worldview stage. It may have changed slightly since then because of various factors but the essential estimates are probably still accurate. 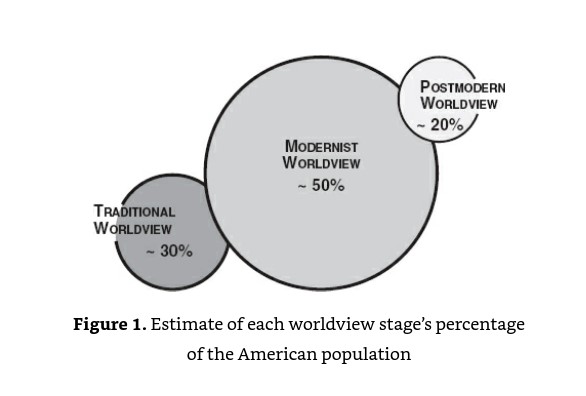 From an Integral perspective the estimates of percentage of the population at the various worldviews is not a value judgment but merely a description. Within an evolutionary context every person and cultures  pass through these stages of worldviews on their way to maturity. Understanding the worldview of persons and cultures helps one adjust one’s style and approach of communication so that the interaction can be more effective, efficient, satisfying, and fulfilling for the participants and others in the environment of the participants.

Unitarian Universalists tend to appear more frequently within the modernist and postmodern worldview while many in the surrounding society are still at a traditional worldview although the percentage are declining.

Given this frame of reference, it is no wonder that Unitarian Universalism is such a small religious denomination in the United States. One might predict that as society matures the denomination will grow except that currently we are seeing the worst characteristics of the postmodern worldview with its emphasis on political correctness and its judgmental attitudes towards others with different worldviews disrupting the sharing of loving kindness. The move to strident social justice agendas is alienating and polarizing leading to increased separateness and divisiveness rather than collaborative efforts to build a better world based on spiritual understanding of what all humans have in common.

Email ThisBlogThis!Share to TwitterShare to FacebookShare to Pinterest
Labels: The Presence Of The Infinite