Augustine’s dawning and search as described in his book, The Confessions. 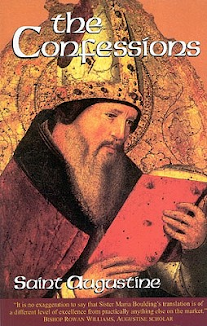 Rediscover The Saints by Matthew Kelly begins with  a chapter on Saint Augustine of Hippo. Augustine’s book, Confessions, is a foundational text on the spiritual life from a Christian viewpoint. The Confessions is an autobiography written around 400 CE which describes how Augustine turned his life around. Augustine realized that he was not satisfied with the direction the world was moving in and what he was doing with his life. Augustine experienced what is called “ a dawning” that there is a better way to live life and this dawning precipitated a search for that without which he was restless and in which he sought peace.

This post begins a series of posts on the Confessions of St. Augustine.

Email ThisBlogThis!Share to TwitterShare to FacebookShare to Pinterest
Labels: Book notes - The Confessions