Where have all the members gone? UU is shrinking. 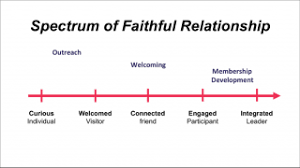 Doubling concerns, according to its last census in 2020, UU membership was at its lowest in twenty-three years. Despite the country’s population increasing seventy-five percent, UU’s membership is nineteen percent smaller than when it was formed in 1961 and has shrunk since introducing radical anti-racism initiatives starting in the last twenty-five years. (UUA 2020) (Loehr 2005) (Halsted 2019) (UUA 1997)

Cycleback, David, "Why The UUA Is Doomed To Fail," UUMUAC Newsletter, May, 2022

Where have all the UUs gone? The denomination is shrinking despite so much that it has to offer the world.

UU got distracted by a social justice agenda rather than its true mission which is to facilitate the growth of spiritual intelligence. UU needs to enter into a time of renewal to rethink its mission and where best to invest its knowledge, skills, and values.

Email ThisBlogThis!Share to TwitterShare to FacebookShare to Pinterest
Labels: UUA