The Doctor's Wife, the book 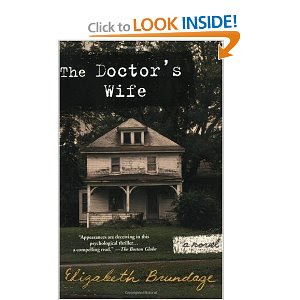 I rarely read books twice. In my 64 years, I could count the number on one hand. In the last six months I have read two books twice both with a great deal of enjoyment and edification. Both books I read because we were discussing them in our book club sponsored by the Brockport Unitarian Universalist Fellowship which meets the second Tuesday of every month.

The first book I read twice was To Kill A Mockingbird by Harper Lee. This year is its 50th anniversary.

The second book I have read twice is The Doctor's Wife by Elizabeth Brundage which we will be discussing on 4/13/10.

There are many things I like about this book. First, it is set in Albany, NY where I went to graduate school and so the geographical references are familiar to me. Second it is a psychological thriller which moves right along and is a fast read. Third, the themes are complex and the author deals with them in a manner which is nuanced and even though morally charged she is never judgmental.

Michael Knowles is an obstetrician who volunteers to work in an abortion clinic and he and his family become targeted by a right wing pro life group who plots to kill him. Meanwhile his college professor wife is having an affair with a colleague who is an artist who has made a career painting nude portraits of a minor child he adopted when her parents died and later on marries. This woman Lydia Haas becomes the primary perpetrator of the pro-life violence after being slyly seduced into this role by the very charismatic minister of this fundamentalist group.

Throughout the book the reader is subtly introduced to moral dilemmas that have no clear cut answer. The readers heart is sympathetic to all characters even when they are engaged in questionable behavior.

I love this book. I enjoyed it as much, if not more, the second time as the first time. I highly recommend it and can't wait for the discussion in the Brockport Unitarian Universalist Fellowship Interfaith Book Discussion Group on 04/13/10.
Posted by David G. Markham at 9:14 AM