Is Barak Obama "Chrisitan" enough for Christians or should he be Christianier? 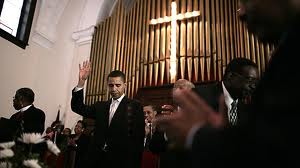 WASHINGTON (RNS) When President Obama lit the National Christmas Tree behind the White House last year, he spoke of a “child born far from home” and said “while this story may be a Christian one, its lesson is universal.”


This year, Obama referenced that same “child born far from home,” but added a more personal twist: “It’s a story that’s dear to Michelle and me as Christians.”


Three days later, at a Christmas benefit concert, the president again talked about how the story of Christmas “guides my Christian faith.”


What changed? For one, three separate polls in the past year have found that one in four Americans think the president is a Muslim, 43 percent don’t know what faith he follows, and four in 10 Protestant pastors don’t consider Obama a Christian.
Posted by David G. Markham at 7:00 AM