Was Saddam Hussein any worse than the U.S. occupation for Iraqi Christians? 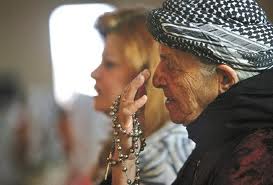 I don't like it when I hear people say with misgivings about the rationales about the Iraq war, "At least Sadam Hussein is gone."

Saddam Hussein seems to have been better for the Iraqi people overall that the United States "liberators". Now the Christians are fleeing in droves.

IRBIL, Iraq -- They saw their brethren murdered during Mass and then were bombed in their homes as they mourned. Al-Qaida vowed to hunt them down. Now the Christian community of Iraq, almost as old as the religion itself, is sensing a clear message: It is time to leave.

Since the Oct. 31 bloodbath in their Baghdad church, Iraqi Christians have been fleeing Sunni Muslim extremists who view them as nonbelievers and agents of the West. At a time when Christians in various parts of the Muslim world are feeling pressured, Iraqi Christians are approaching their grimmest Christmas since the U.S.-led invasion of 2003 and wondering if they have any future in their native land.


They have suffered repeated violence and harassment since 2003, when the interreligious peace rigidly enforced by Saddam Hussein fell apart. But the attack on Our Lady of Salvation in which 68 people died appears to have been a tipping point that has driven many to flee northward to the Kurdish enclave while seeking asylum in the U.S. and elsewhere.
Posted by David G. Markham at 12:11 PM