Reading Buehrens/Parker - On what do we base our faith? 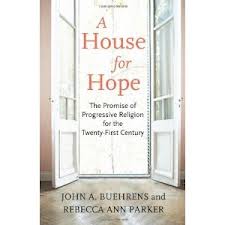 In part four of A House For Hope: The Promise of Progressive Religion for the Twenty-first Century, Rebecca Ann Parker and John Buehrens write about "Foundations" the basis for belief in God.

There is the story of John Buehrens asking atheists "What God is it that you don't believe in?" that seems to get to the crux of the issue. People of the books say that God is "revealed" in the scripture and that very scripture warns against idolatry.

The psychologists tell us that everyone believes in something whether they are aware of it or not. Everyone has a motivating understanding of life that gives their lives meaning whether it is money, sex, family, drugs, work. As humans we have our gods which we worship and devote our lives to.

On Beliefnet where there is the "Belief - O - Matic", the 20 question quiz which helps people select a religion which best matches his/her beliefs, the first question is:

What is the number and nature of the deity(ies)?