Here is one of the sermons that Harry gave me. I thought it was pretty good. Leave your comments if you will. 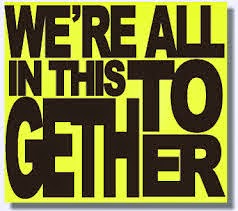 I know, I know, I know, most of us weren't taught this. We were taught that the God of the faith only loves certain people and hates others. I have always questioned what kind of God this is.


Having been raised Roman Catholic I was taught contradictory things: that only Catholics would go to heaven, and that if people were of good will and loved God they would go to heaven even if they hadn’t heard of Jesus and Jesus’ God. In other words, people of good conscience, regardless of their dogmatic beliefs could go to heaven, too. It was comforting, because my father was not Catholic as well as a lot of my friends as well as the millions and millions of people in China.


As a late teen I “lost my faith”. I had too many unanswered questions. Osho says:
“Doubt makes one mature. You remain childish unless doubt has penetrated your soul. Unless the fire of doubt starts burning in you, you remain immature: you don’t know what life is. You start knowing life only by doubting, by being skeptical, by raising questions.”


Jesus says that unless you become as child again you cannot enter the Kingdom of Heaven. What is Jesus talking about? He is saying that you have to go through your doubts, arguments, reasonings, childish superstitions, until one comes back to the original face of God which is within not without. A person matures and becomes an old man, an old woman, more matured, experienced, sometimes bruised but joyful and at peace none the less because the mature person realizes that there is nothing to fear, and simply is full of love for oneself, others, and the world.


Osho says, “Truth is not something outside to be discovered, it is something within to be realized.”


Osho says we have to give up our childish superstitions and allow ourselves to doubt. If we think we know Who or What God is we have fooled ourselves. Osha says:
“Buddha says once you understand that you are lost and you have to find your own way and there is no help coming, you become responsible. Prayer is irresponsible. To pray is just to avoid responsibility, to pray is too lazy. To pray is just escape. Buddha says effort is needed. It is an insult to pray. So in the Buddhist approach nothing like prayer exists, only meditation. You can meditate, you cannot pray.”


Can you just sit with your doubts? Watch them swirl and dance in your mind’s eye. They won't kill you. Once you realize this you will find something much deeper - peace. It is there beyond all the bull shit, all the nonsense which in the end doesn’t amount to anything anyway.

We all have the ability to get to heaven. We just have to clear away the clutter, give up our crazy beliefs, and become aware that Love is not only real, but is our essence, who we are, part of God’s being. One of favorite bumper stickers reads “Life, we’re all in it together and nobody gets out alive.”