An eye for an eye = justice, really!? 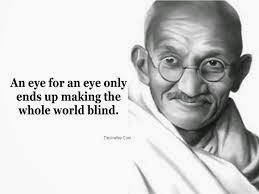 The Code of Hammurabi has been around for almost four thousand years, you know, the eye for an eye, a tooth for a tooth stuff. Now days, its known as retributive justice, you do the crime, you do the time. As an added twist "the king's justice" was mixed in during the feudal era so that injustice was no longer between the perpetrator and the victim but between the perpetrator and the king, the State. Victims were marginalized as the State took crime personally, a disruption of the King's peace, or civil order. And so justice became perverted. It became a game between the State, the district attorney, and the perpetrator and now days there is all kinds of chicanery with plea deals, copped pleas, reduced charges in return for testimony, high priced legal hijinks with attorneys known for working "magic" to get perpetrators off the charges. Is this the kind of justice that Unitarian Universalists are covenanting to affirm and promote? Business as usual in our criminal justice system?

Today's criminal justice system is criminal. It is only a naive person or someone politically cynical who would expect any kind of "justice" to come from it. The criminal justice system has very little to do with justice or the truth. All parties to today's criminal justice system has a personal stake in it from the judge, to the district attorney, to the defense attorney, to the accused, to the victim, to the community and none of these parties rarely want justice and truth. They each want something different and for every expectation and requirement there is a cost as well as a benefit, and each party is competing to achieve the greatest benefit with the least costs possible. What is in the hearts of each of these stakeholders is not justice but to win, and if winning takes bending the rules, avoiding, denying, or ignoring the truth then so be it. That's how the game is played.

Justice in the United States and most of the world is retributive justice. Vengeance, retaliation, retribution is not only tolerated and accepted but often times encouraged and advocated. It has filled America's prisons to record breaking numbers in the world per capita, and America is only one of a handful of countries, and the only first world democratic country which still executes people. Americans are a vengeful, vicious people compared to other countries and cultures. It is within this society that Unitarian Universalists covenant to affirm and promote their second principle: justice, equity, and compassion, and yet, most Unitarian Universalists have no, if any idea, of what justice actually entails in their own country. They say that ignorance is bliss and Unitarian Universalists, like most Americans, are blissfully ignorant when it comes to our criminal criminal justice system.

How can a principle be affirmed and promoted when the adherents covenanting don't even know the elementary facts of the situation?