Money or butterflies, that is the question? 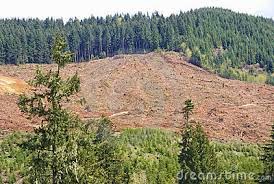 Bear Turnbow, Cub's father and Dellarobia's father-in-law, is planning on selling the trees in the woods that the Monarch butterflies are roosting in to loggers for money to pay his taxes and the balloon payment on his equipment loan. Not is Bear only planning on selling some of the trees, but he is planning on allowing the the loggers to clear cut. Here is how Kingsolver writes the scene:

"A clear cut. Cub, honey, could you at least sit up and discuss this like a human? You mean they are taking out everything down to the slash?"

Cub sat up and gave her a sorry look. He has fleece clinging to his trousers and hay in his hair, a sight to see. "That's where they'll give you the most money. According to Dad, it's easier when they don't have to pick and choose the trees." p. 39

The bumper sticker says, "Good, fast, cheap. Pick two." The capitalistic ethic tells us that the most money is the goal, even if other values suffer. Americans like speed. They want things fast: food, cars, women (ha ha that's a joke, please don't take offense. I'm only trying to make a point here.)

A little further, Kingsolver, describes Cub's personality. He is a nice guy but not the sharpest knife in the drawer, not the brightest bulb on the shelf.

"And there stood Cub, with his rock steady faith that she knew more than he did, in any situation outside of automotive repair. His bewildered sexual gratitude, as near a thing to religious awe as a girl of her station could likely inspire. These boyish things had made him lovable. But you can run out of gas on boyish, that was the thing. The message that should be engraved in every woman's wedding band." p.40

As you read further in the novel you will find that Dellarobia is much more inspiring for attributes other than her body, and yet these qualities that might inspire a "religious awe" are lost on people who are not mature enough to perceive them.

Dellarobia senses that there is more at stake in logging this mountain than money; we might be talking the extinction of a species, and this fact of the situation might lead one to question, "Who gives two hoots?"

Bear and his family need the money. They are poor people living on the edge. He needs to pay his taxes or he will lose his farm. He needs to make the balloon payment on his equipment loan or his equipment will be repossessed. Who cares about bugs?

You might think that, were people more aware, they might take up a collection to pay Bear's taxes and equipment loan and then there would be no need to log the woods for money. But alas who would organize such an effort, educate people on what is at stake, collect the money if people would donate it? Is this what a church would do if its members were so inclined or some environmental group? Whose responsibility is it , anyway? You can't leave it to the likes of Bear, Cub, and Hester Turnbow. Dellarobia is an outsider in this family, and feels she has been treated as such, but she is Cub's wife and the mother of Bear and Hester's grandchildren. Dellarobia has power she doesn't know she has and as the story progresses she becomes more and more aware of it, like so many of us are discovering in our own lives.

As Mother Teresa said, "Do not wait for leaders. Do it alone, person to person." As Dellarobia moves forward step by step she follows her faith in her growing awareness of what's right. She is bemused and perplexed herself about what is happening around her and to her own consciousness. What is it with these butterflies?