Nature is not to be dominated because it is part of us and us part of her. 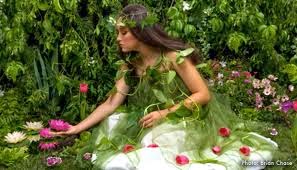 Dellarobia, standing on that mountain top, seeing the Monarch butterflies has a mystical experience of sorts. Kingsolver writes in her novel Flight Behavior:

"She (Dellarobia) is on her own here, staring at the glowing trees. Fascination curled itself around her fright, This is no forest fire. She was pressed by the quiet elation of escape and knowing better and seeing straight through to the back of herself, in solitude. She couldn't remember when she'd had such room for being. This was not just some fake thing in her life's cheap chain of events, leading up to this day of sneaking around in someone's thrown-away boots. Here that ended. Unearthly beauty had appeared to her, a vision of glory to stop her in the road. For her alone these orange boughs lifted, these long shadows became a brightness rising. It looked like the inside of joy, if a person could see that. A valley of lights, an ethereal wind. It had to mean something." p.15-16

Ikkyu, the Japaneese Zen Buddhist monk of the 15th century wrote "Every day, priests minutely examine the Law and endlessly chant complicated sutras. Before doing that, though, they should learn how to read the love letters sent by the wind and rain, the snow and moon."

Dellabrobia in pursuit of carnal love or more likely lust comes face to face the a "love letter" from Mother Nature. Such a love letter engenders a sense of awe, mystery, beauty.

"When we first arrived as settlers, we saw ourselves as the most religious of peoples, as the most free in our political traditions, the most learned in our universities, the most competent on our technologies, and the most prepared to exploit every economic advantage. We saw ourselves as a divine blessing for this continent. In reality, we were a predator people on an innocent continent." p.17, "The World Of Wonder" in Spiritual Ecology.

We have been taught in our Judeo-Christian tradition that human beings are here to dominate the earth and so we have further developed a dichotomy of us and nature. Nature often is depicted as our enemy with forces to be tamed. Slowly we are realizing that we are not separate from nature but part of nature. There is no battle here, but a matter of cooperation and collaboration.

Chief Oren Lyons, the faithkeeper of the Turtle Clan of the Onondaga Nation writes:
"So I would say that in the ideas of renewing yourself and the ideas of finding peace in our community, you should tell your leaders and you should tell everybody that there can never be world peace as long as you make war against Mother Earth. To make war against Mother Earth is to destroy and to corrupt, to kill, to poison. When we do that, we will not have peace. The first peace comes with your mother, Mother Earth." p.11, "Listening to Natural Law" in Spiritual Ecology.

Dellabrobia is making peace with herself and her environment when she has a shift in perception, what in A Course of Miracles, is called a miracle.

Miracle principle 29 is "Miracles praise God through you. They praise Him by honoring His creations, affirming their perfection. They heal because they deny body-identification and affirm spirit-identification."

Miracle principle 30 is "By recognizing spirit, miracles adjust the levels of perception and show them in proper alignment. This places spirit at the center, where it can communicate directly."

Here again is how Kingsolver describes Dellarobia's experience: "She was pressed by the quiet elation of escape and knowing better and seeing straight through to the back of herself, in solitude. She couldn't remember when she'd had such room for being."

Have you every had such a room for being?

My Kind Of Church Music - What  A Wonderful World, Louis Armstrong

Email ThisBlogThis!Share to TwitterShare to FacebookShare to Pinterest
Labels: Kingsolver, My Kind Of Church Music