Saint of sinner? The Lord works in strange ways 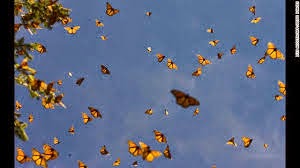 Dellarobia has gone up on the mountain for a tryst with her lover in a hunting shack when she first saw the Monarch butterflies, King Billies, as her mother-in-law Hester and Dellarobia's seven year old son, Preston, came to call them. When Cub announced to Dellarobia that his father, Bear, was planning to log the mountain for money to pay his taxes and balloon equipment loan, Dellarobia convinced Cub and he and his father should go up on the mountain to inventory the trees before signing the contract. Cub resisted saying it wasn't necessary, but Dellarobia finally shamed him into doing it so that he and his father had a clear understanding of what it was they were selling. Once Bear and Cub went up the mountain and saw the butterflies and returned to get Hester and Dellarobia and went up to see them again they were mystified. here is how Kingsolver describes the scene:

"Mother, Dad, listen here. This is a miracle. She had a vision of this."
Bear scowled, "The hell."
"No, Dad, she did. She foretold it. After the shearing we were up talking in the barn, and she vowed and declared we had to come up here. That's why I kept telling you we should. She said there was something big up here in our backyard."
Dellarobia felt the dread of her secrets. She recalled only her impatience, speaking to Cub in anger that night, telling him anything could be up here. Terrorists or blue trees."
Hester peered into her face as if trying to read in bad light. "Why would he say that? That you foretold it."

"Here's your vision. I see a meddling wife." Bear shook his head in weary disgust, a gesture that defined him, like the dog tags he still wore after everyone else had given up on his war. A large and mighty man among the triffling, that was Bear's drill. "You all need to get down off you high horses," he said."We're going to spray these things and go ahead. I've got some DDD saved back in the basement."

The DDD was illegal, of course, having been banned after Rachel' Carson's book, "Silent Spring," convinced congress they had to do something to protect the environment from such a toxic insecticide.

As they argue with Bear about the judiciousness of killing the butterflies with DDD, Cub finally says to Bear:

And the plot thickens as they say. Dellarobia lets her husband and mother and father-in- law think that she has a vision inspired by the Lord about the butterflies. Little did anyone guess that she had actually seen them on her way to commit adultery. What some might judge the work of the devil has been flipped into the work of the Lord and instead of a sinner, Dellarobia, is perceived as something akin to a modern day saint having visions of the wholeness of the planet and the need to protect a species endangered by climate change.

The Lord does work in mysterious ways. Who would have thought that the Lord might have used what humans think of as sexual sin to protect the victims of environmental sin. Perhaps the god of Mother Nature is not the same god as the god of the old testament. Jesus let the adulterous woman go from the guilty verdict of those who would have executed her for her crime while those who destroy the fabric of Mother Nature knowingly and willing may be guilty of far greater crimes than ones of simple carnal lust. The harm that is done to Mother Nature and its negative consequences for the people who are victimized is far, far greater, than any harm done by indulging one's personal and private lust.

And so is Dellarobia a sinner or a saint or like most of us, perhaps, a little of both?
Posted by David G. Markham at 7:00 AM