Story of the day - Would you rather be right or be happy? 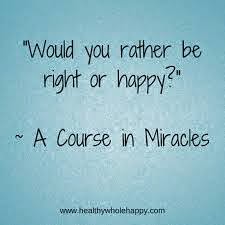 She said, "You made your bed so you got to lie in it. Don't look to me."
No, no, no he said to himself. It would be, is a big mistake, to look to her for anything, because she was so hurt, so closed hearted that she had nothing to share. It would be too risky like letting her guard down, taking a brick out of the wall that not only surrounds her but has ivy growing thickly all over the walls. She'd been like that all the years he had known her. She had been abused as a child and carried very heavy baggage which for the most part, went unacknowledged.

For 35 years she was never wrong about anything, never apologized, never, not even once, said she was sorry, and he had sucked it up to make the marriage work, but no longer.

"I'm not even talking any more about it. You just do what you want to do anyway!"

He'd never done just what he wanted to do anyway because he was too scared, too scared to rock the boat, and get her upset, and then there would be hell to pay for days if not weeks. In his panic, the Holy Spirit whispered to him, "This is no way to live. There is a better way."

So in his panic attack he stuttered, "Yeah, yeah, well...............you're right. I am going to do what I want to do anyway." He walked away and he knew it was the end. This was the very abandonment she feared, and her suspicion that he would one day abandon her turned out to be true. She would rather be right than be happy. She had backed herself into a corner and sued him for divorce. She couldn't chance his opposing her again.

And so it passed that they got divorced after all those years, and there is no mercy, not for his sins. There is no forgiveness in her heart, she can't afford it. Can't get blood out of a rock as they say.

Compassion, justice, equity? Not here, not in their house. Not in this relationship, not in this life time.

He turned it over to his Higher Power, God's will be done and all that jazz. Since the time he told me his story, he has gone to heaven, and she, she still resides in the hell of her own making. One day perhaps she may realize that she could have had peace instead of what she created which the children, now adults, have described as a dysfunctional hell on earth.
Posted by David G. Markham at 7:00 AM

Email ThisBlogThis!Share to TwitterShare to FacebookShare to Pinterest
Labels: Thought For The Day