Antidote for incapacitating knowledge is a rich interior spiritual life 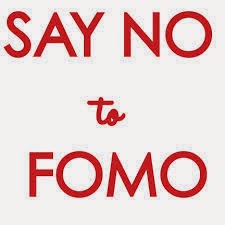 We have the internet and google and as Pipher quotes a school administrator she interviewed, "Sometimes in the early 1990s problems stopped being solvable." A friend put it this way, 'There are no simple problems anymore.'" p.16 Pipher doesn't say this, but I sensed that what the school administrator said was true and I wondered why, and then it dawned on me, the mid 90s was when the world wide web began to come into common use. We are overwhelmed with information. You know the old saying "Ignorance is bliss?" Well, we aren't ignorant any more. The information is at our finger tips, and our bliss has quickly evaporated.

As we have become more enamored with the electronic media a new phenomenon has emerged called FOMO, Fear Of Missing Out. We see it hourly with people transfixed by robots such as smart phones, tablets, laptops, Ipods.

Pipher writes further "Sociologist Barbara Katz Rothman has a phrase for information which makes life seem more complicated and disturbing than it already is. She calls it 'incapacitating knowledge'" p.23

Pipher observes, "Psychologists know that delivering too much bad news at once leads to emotional shutdown. But sugarcoating facts doesn't inspire positive change, either. In therapy, clients need a certain amount of anxiety to propel them toward change, but not so much as to discourage their hopeful efforts." p.25

If it is accurate to say that we live in a time of "incapacitating knowledge" people need to be encouraged to turn the media off, to strategically withdraw and turn their attention from the ego plane which increasingly has become a hell to the kingdom within. I, as a therapist, have increasingly been asking my clients, "What's your interior spiritual life like?" and surprisingly for me, people usually respond readily. I have never had a client object to the question and almost always the client articulates some description. The antidote to the vicarious trauma what we all are increasingly subjected to is the development of an interior spiritual life. We have seen the rise of popularity in yoga and meditation classes in the United States. The self-help sections of the bookstore are loaded with books on "mindfulness" and relaxation techniques.

What does Unitarian Universalism have to offer to help people develop an interior spiritual life that enhances awareness of Love's presence? Unitarian Universalism draws from its six sources but it seems Unitarian Universalists are pretty much left on their own to explore and draw from these sources rather than access an integrated approach unique to Unitarian Universalism itself. It would seem that the one thing than Unitarian Universalism possesses and can convey is the idea the God loves each and everyone of us unconditionally. UUs have a long history in the belief in universal salvation. How this is brought about is in not only the belief but the action of loving one another. In my early Roman Catholic upbringing I learned the latin expressions, "Pax vobiscum", peace be with you, and the answer was "et cum spiritu tuo." and may the spirit be with you." As UU ministers like to end their sermons, "May it be so."