Fighting for the environment: resilience in the face of defeat 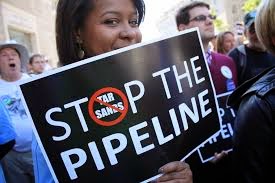 In Chapter eleven of The Green Boat by Mary Pipher she describes the setbacks and defeats as she and her Transcanada Keystone XL pipeline coalition try to block its construction across her beloved state of Nebraska. It appears that the Nebraska legislature and Governor have been bought out by the lobbyists for Transcanada.

It is a familiar story these days to anyone who follows what has happened to the corruption of our legislative processes at county, state, and the federal levels as "lobbyists" have put our legislators into office to do their bidding and in many cases actually write the legislation which their legislative flunkies are expected to pass. The voters, the citizens, the people the legislators and Governors and President have sworn to serve and whose interests they have sworn to represent are so marginalized and disenfranchised from the actual legislative process that democracy in the twenty first century has become a joke because it is a travesty of justice and equity and this way of doing business has brought great shame to our country, its government, and the future of our country and planet.

How is a sane person to operate on such an uneven playing field in advocating and achieving the best policies that serve all the people not just vested interests?

Pipher asks the members of the coalition, "I'd like to ask everyone how they keep going and caring in the face of continual defeat?" p.206. Pipher then gives snippets of the answers for the various members who say multiple things like I do it for my kids's future. I do it because they expect me to give up and I don't want to give them the satisfaction. I do it because I've always been an activist and it's part of my identity. I do it simply because I like the work and the people I'm working with. I do it to be true to myself and my deepest values and beliefs. I do it because even though it looks like we will be defeated I have great faith that if we are patient and persistrent, we will win. I do it because I am a nurse and I see the earth as my patient and I want to keep her healthy. I do it because I like the people and the food we share when we get together and its more fun being with you folks than watching TV or going bowling. I like the process because I develop satisfying and fulfilling relationships with other people and whether we are successful or not I can't control, but I can still enjoy the relationships I have made with some great people.

Pipher ends her chapter with a couple of great lines which are well worth repeating and sharing.

"Yet, almost all truly great causes, world peace, the abolition of slavery, the eradication of hunger offer no quick victories." p. 212. I would add women's suffrage. Susan B. Anthony and her contemporaries never saw it in their lifetime after a lifetime of advocacy, but it did come in 1920 finally after Susan's body was rotting in its grave, but her spirit, dedication, values, beliefs are still alive and well and now days her's and the other early suffragettes victory is taken for granted as "normal" by contemporary females.

The second great line at the end of the chapter is, "My aunt Grace often said, 'I get what I want because I know what to want.'"

Unitarian Universalists covenanting together to affirm and support their seven principles know what to want and their seventh principle calling for "respect for the interdependent web of all existence of which we are a part" is a value that serves not only UUs very well, but all of humanity and all other living things.
Posted by David G. Markham at 7:00 AM