Story of the day - How racism is learned 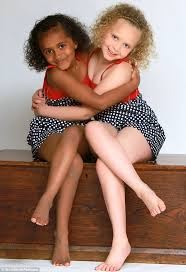 Our little Mary, Shirley Temple look alike, came home from kindergarten, and said with a pout, "I don't like black people!" My wife and I were horrified. How could our darling little white girl with the curly blond hair and blue eyes and polite middle class upbringing, be a racist?

Her kindergarten was in a school which was part of the "urban-suburban" program meaning that inner city children were bused out to school in the suburbs and most of these "city children" were, of course, people of color and lower class. What Mary was objecting to was not that they were black but that they were aggressive, unmannered, didn't use middle class speech patterns, and had values foreign to Mary's middle class upbringing. What to do to help Mary, 6 years old, with growing antipathy towards this behavior? Should we encourage Mary to "stand her ground" and fight back, or be passive and "nice" and continue to get taken advantage of? Perhaps we should find a way to help Mary find a middle ground.

My wife and I had a conference with the teacher who at first was very polite, reserved, and diplomatic, but as the conversation continued she admitted that there was quite a culture clash, and her job as a kindergarten teacher was made much more challenging by the very different social backgrounds of her students. How to help the middle class kids tolerate or constructively respond to the objectionable behavior of the lower class kids was a challenge that the teacher often felt inadequate and unsuccessful in dealing with. The teacher said that Mary was one of her best students, well behaved, followed directions, and tried hard to accommodate the objectionable behavior of the inner city kids, and yet there were times that the teacher said she observed that Mary was hurt and mistreated.

Should we move Mary to another classroom that did not participate in the "urban-suburban program?" As we considered this, a miraculous thing happened. Mary made friends with a sweet, delightful, African American girl, who agreed with Mary that sometimes the boys were "too rough". Mary and Laketa became good friends and Laketa was invited to come to our home for play dates but she never did. My wife and I, I am embarrassed to admit, were just as happy with this for fear that Laketa's mother would want to reciprocate and Mary would go to her home in the inner city.

I became well aware that my discomfort was not about race, but about class. If Laketa had been Bill Cosby's child or Michael Jordan's, no problem, but the child of single mom living in poverty with a father no one seemed to know about, raised fears of the unknown especially when we considered if we would be responsible parents subjecting our daughter to these circumstances.

My wife said to me, "You know Jerry, this is how racism is learned. It's our fears and attitudes as much as anything that get unconsciously shifted to Mary. She knows we are afraid, and wary of these people too, and really don't want her to get too close to Laketa."

"Better than nothing," I said, "at least we are trying. Not perfect, but I hope somehow it helps."

My Kind Of Church Music - Ebony and Ivory, Paul McCartney and Stevie Wonder