If your mother beats you stay away from her or they will put her in jail. 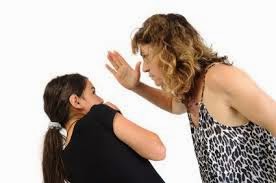 The eighth story in Linda McCullough Moore's book of short stories, "This Road Will Take Us Closer To The Moon" is entitled "Mother's Helper." The narrator, an eight year old little girl tells the story of visiting her mother's friend who has two teen age daughters one of whom tells the narrator that the narrator's mother is going to jail because she hits and beats her children. She is further told that she can keep her mother out of jail by not allowing her mother to hit her which she does by running from her when her mother is angry and likely to hit her. The narrator says:

"I told my brothers and sister that our mother could be put in prison for beating us and so to be on guard and always run away. I don't know if they did or not. You can't remember anybody else's childhood, sometimes not that much of your own." p.100 - 101

I loved this story because at age 68 I still remember well avoiding my father out of fear that he would lose his temper and hit me. I got very good at perceiving his moods and either being hypervigilant if he was in a bad mood or allowing myself to be a bit more relaxed when he was in a better mood.

My brother, one year younger, didn't seem to have the same perceptive skills I had developed and would walk into my father's furry and beat on a regular basis while I was able to side step it. I have felt guilty for this my whole life and angry at my brother that he never seemed to develop the same level of empathic skills to read other people's emotions and manage them for them so he could keep himself from getting hurt.

I remember he and I one time left the house and got the crossing guard on the corner to come to our house because we were afraid that my father was getting out of control and would beat my mother. I certainly became my mother's little helper, and when older her surrogate husband, and the protector of my younger siblings.

There are a lot of children who grow up being what we call "parentified children" because they play the role of a third parent when the parents are out of control or negligent.

In Unitarian Universalism and other religions domestic violence is often ignored or rationalized. God, after all, wanted His own son sacrified and crucified to appease God's anger at human sinfulness. So, I, and millions of others, have grown up with a perverse belief in submitting to and accepting abuse as a necessary atonement for our sins and a sacrificial martyrdom on the behalf of others.

Of course this myth is perverse, dysfunctional, and leads to much human suffering. As a 68 year old man, I no longer live in fear of my father's abuse, but I continue to be leary of sadistic, angry types who seem to get their jollies from taking their frustrations and insecurities out on other people. Those who would lead nations to war, torture "terrorists", and administer capital punishment under the guise of justice still scare me the most. I refuse to help them, and wonder what would happen if more of us also refused? What if our leaders called for war and no one showed up?
Posted by David G. Markham at 5:43 PM