Meaning is derived from influencing the evolutionary trajectory of our manifestation 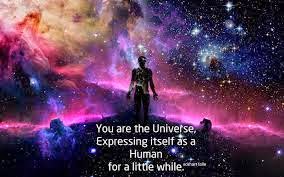 As we consider the fourth principle of Unitarian Universalism, the free and responsible search for truth and meaning I am reminded of the verse in A Course Of Miracles in the introduction which reads, "The course can therefore be summed up very simply in this way: Nothing real can be threatened. Nothing unreal exists. Herein lies the peace of God." Now that is a lot to wrap your mind and heart around. The teaching of the course is that we make up the world on the ego plane. None of it is real, really. The only thing real is the Love of God which we have separated ourselves from when we developed our egos and the healthy spiritual development is to transcend our egos and return, as it is written in the Perennial Philosophy, to the "unitive Godhead." To become one with all.

Dennis Ford in his book The Search For Meaning discusses meaning within four paradigms: the mythic, the philosophical, the scientific, and the postmodern. The meaning we make and the truth we seek are attempted within some meta-narrative which we usually are unaware of and take for granted as the basis for whatever meaning we arrive at or truth we find. The observation that an unconscious meta-narrative guides our meaning making and truth seeking is the contribution of the postmodern view. It seems that the meaning we make and the truth we find we just make up as the existentialists have been teaching for 50 years. And so we wind up back with the observation in the introduction of A Course In Miracles which assures us that nothing real, meaning the spiritual plane, can be threatened because all the projected ego nonsense that we call our lives doesn't really exist. While we resist and recoil at this idea if we step back and look at it from our witness, it is readily apparent that every thing we have created is impermanent as the Buddhists have taught us. It all passes away sooner or later even our scientific findings which seem true until the next issue of the latest scientific journal comes out.

What is the "real" that cannot be threatened?" My answer is the creative energy of the universe of which we are a part and a manifestation. That's the Truth. Meaning is derived from influencing the evolutionary trajectory of our manifestation.