The importance of the "why" question 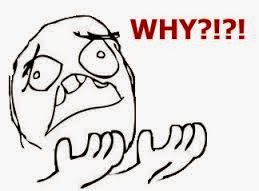 Dennis Ford writes in his book, The Search For Meaning, "...asking 'why?' signals the point at which we self consciously step back from what we are doing to look for a reason or justification. With this simple, childlike question, the taken-for-granted quality of life suddenly loses its foundations, and we are left exposed to the threat of meaninglessness." p. 1

Our lives require no explanation when we take them for granted. It is not until we have choices that the meaning and truth question comes up. Prior to asking "why?" we are innocent and naive. We may be ignorant in the sense that "ignorance is bliss". The Unitarian Universalists, the free thinkers, have a long history of asking "why?" for which they have been shunned, excluded, dismissed, mocked, and punished.

Since the dawn of the philosophical, scientific, and postmodern mind the why question has gained greater and greater ascendency and the answer is?

It's in the book meaning the Bible, the Koran, the Talmud. Why should we believe and follow what's in the book? Because it's the revealed word of God according to the priest, the pastor, the iman, the rabbi. And for most of humanity, they go back to sleep and accept, submit, comply but there are some that don't. There is a very small group in societies who continue to be a pain in the neck with their questioning. And it is they, although they are persecuted by the majority, who lead the way on the evolutionary path to true salvation.
Posted by David G. Markham at 7:00 AM