Democracy has its limitations 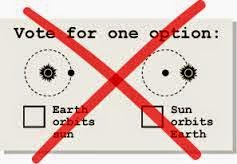 Ted said, “I was taught in graduate school that there is three kinds of knowledge: knowing what, knowing how to, and knowing what is wanted for people or knowledge, skills, values for short.” The first two types of knowledge having nothing to do with individual conscience or democracy. You can’t arrive at scientific knowledge democratically any more than you develop skills and competencies democratically and yet everyone on this freaking committee things that their opinion is as valuable as everyone else’s or their idea of how to proceed is as good as everyone else’s and that’s just nonsence.”

“Absolutely, right!” said Harry. “I’m sick of this. I can’t take it anymore. These meetings are a waste of time. I’m resigning. I don’t want to waste my time arguing with people who are ignorant and incompetent.”

“This consensus model is no way to run a congregation or any organization which aspires to success for that matter,” said Joan. “The sweet Reverend wouldn’t call a spade a spade if her life depended on it. Sometimes I wonder if she even knows what she’s doing?”

Barb said, “Being sweet and having a good pastoral bed side manner is comforting in times of distress, but she doesn’t seem to know where we should be going and she doesn’t want to offend or alienate anyone so she won’t take a stand even if she has one.”

Ted and Joan, and Harry and Barb continued their discussion, some in the congregation called it “whining” but they were on the verge of dropping out of the church. It had gotten too stressful and unfulfilling. Barb had told David when she met him in Wegman’s, “We couldn’t do it any more. They just don’t know what they want or where they’re going. We are looking for something else where our investment of time and energy will be more productive.”

David said, “Yeah, they’re losing members and money, and they’re not going to meet their budget next year. Something’s got to go. They can’t keep on like this. You know what they say, ‘If you don’t know where you’re going,  any road will take you there.’”