"Democracy" is not a good management strategy 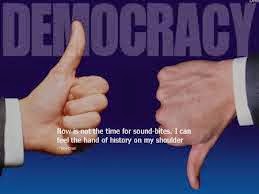 The fifth principle of Unitarian Universalism is the right of conscience and the use of the democratic process within our congregations and in society at large." The very thing that the founding fathers of the United States feared about democracy, "mob rule," is what has shackled the growth and success of Unitarian Universalist churches.

Not only "mob rule" but mediocrity is the result of democratic processes which are captured by special interests. All you have to do is look at Unitarian Universalist congregations which are very small by comparison with other denominations and the congress of the United States today which has devolved into grid lock.

No successful corporation or business is run democratically for the simple reason that a business run this way would go bankrupt and not be successful.

I have watched a UU congregation which I helped start founder and now is on the brink of dissolution because of its democratic processes which means than no one is in charge and nothing gets done to manage the organization effectively. 80% of UU congregations are under 100 members. This observation is directly related to adherence to the democratic process which often degenerates into poor conflict resolution with repeated schisms or dropping out of the congregation because of no clear leadership and contentiousness.

Unitarian Universalism will never be successful as a "movement" as some people call it because of its reliance on democracy for its governance structure. It is time, perhaps, to reflect on the fact that democracy doesn't work very well in the operation of a successful organization.
Posted by David G. Markham at 7:59 AM