I, as damaged goods, being a former Roman Catholic, have found a home in Unitarian Universalism 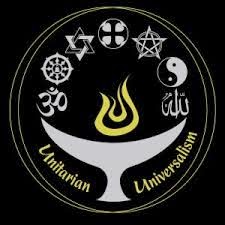 As a former Roman Catholic, I was taught a lot of stuff that was toxic then and is toxic still. Pope Francis seems to be on the right track trying to fix some of this stuff, but I am sure he will not get it all done. The biggest things that are toxic is the church's stance on the sexual aspect of the human body especially reproductive health, and the church's patriarchial and misogynistic beliefs and practices.

Second there is a lot of stuff that is just silly like the virgin birth and Mary's bodily assumption into heaven.

Third, there is a lot that makes sense the foremost being that God is love and that the way to the kingdom is, as Jesus taught, "to love as I have loved."

Fourth, I do like the sacraments and liturgy. I miss that in Unitarian Universalism. Some of the ceremonies and  rituals are very moving, comforting, and uplifting. The Catholics know how to worship when they do it right. I miss communion at every service.

So, I want to thank Rev. Trudean. His four part sorting mechanism is helpful. It helps me separate the grain from the chaf. Rev. Trudeau writes, "...I have come to think that our congregations should be not so much 'decontamination chambers' where people wash away their former religions, but rather workshops where they confront them." p. 7

I think our UU congregations have to be far more than toxic waste dumps for people recovering from religious abuse;  they need to be a place to facilitate the process of recovery and spiritual growth. Our congregations need to be strength based and not focused on deficits and problems.