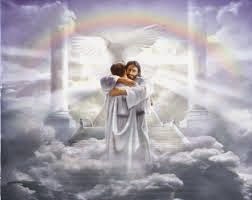 Richard Trudeau writes in his book, Universalism 101 on page 19 "While mainstream Christianity viewed God as having turned away from humanity because of human sin, Ballou's view was that it was humanity that had turned away from God; and that God sent Jesus not to pay the price, but to remind human's of God's love."

Jesus says in A Course In Miracles: "I was not punished because you were bad. The wholly benign lesson the Atonement teaches is lost if it is tainted with this kind of distortion in any form." T-3.I.2:10-11

We humans create our own hell by separating ourselves from God. God loves us unconditionally, but out of our guilt and fear of punishment we can't believe that God loves us. What kind of God is this that exudes unconditional love? It is the God of Universalism and of Jesus and not the God of mainstream Christianity that has manipulated people with hellfire and brimstone and engendered a belief in a vengeful God who damns people to hell for all eternity. What kind of people would make up and teach such a God? This teaching is what John Bradshaw has called the "poisonous pedagogy."

Jesus was never vengeful, and never engaged in retribution. He said He came to change the Code of Hammurabi which influenced the depiction of a wrathful Old Testament god. Universalism teaches quite of different gospel, one of truly good news, that Love is ever present if we can overcome the blocks to our awareness of Love's presence.
Posted by David G. Markham at 7:00 AM