“Twas the night before Christmas,
at a town in the South,
A band of ex-Confederates gathered,
down in the mouth;
That the black man was now free,
they felt was unfair,
An abomination they’d address
with terror to spare;
Crosses they’d burn with white hoods
on their head,
Spreading their message of hate
with horror and dread.”

Yes, ringing in the season with Yuletide cheer, the Ku Klux Klan was officially organized in Pulaski, Tennessee, on December 24, 1865. 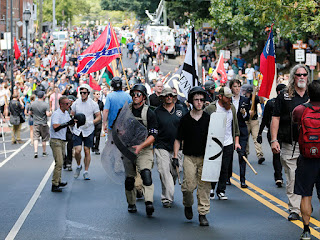 The modern day Klan is thought to have 3,000 and 6,000 members and has seen a resurgence with the election of Donald Trump as President of the United States.

Editor's note: The Unitarian Universalists draw their theology from six primary sources, the second of which is the "Words and deeds of prophetic women and men which challenge us to confront powers and structures of evil with justice, compassion, and the transforming power of love."

With the rise of Trumpism fueled by white supremist rhetoric of Presidential adviser Steve Bannon, the values and ideas of the KKK are not only still strong and powerful in the U.S. but have actually, in 2016,  gotten one of their supporters, Donald Trump, with a long history of racist thought and practices, elected president of the United States.

In this political and social climate, the light of Unitarian Universalist theology, practice, and service is needed by our country and the world more than ever.

Email ThisBlogThis!Share to TwitterShare to FacebookShare to Pinterest
Labels: In case you were wondering, In case you wondered