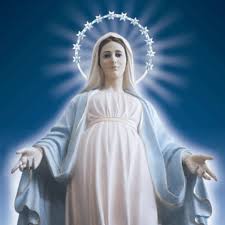 The Christmas story has become one of enchantment. It is the best of the genre of fairy tales. It is about a baby being born in a barn who was sent by God to save the world from its original sin. Alleluia. The angels rejoice and Kings bring gifts and shepherds adore.

What about the mother? She was a teen age mom. This was her first pregnancy and delivery. She was in midst of a journey when she goes into labor.

According to the story she agreed to all this when the angel Gabriel told her, an unmarried teenager, that she would become pregnant and give birth to a son. Did she freak out? Was she frightened? Was she worried about her family and what people would say? Could she try to abort the pregnancy and avoid a life long burden of motherhood? Who knows? We can only guess. Mary, though, says, "Thy will be done."

"Really? What's up with that?"

Had she any idea what she was getting herself into?

The future trauma of seeing her only son killed by the Romans in a horrible execution would be something no parent could imagine let alone accept. Better, she may have thought, had Jesus not been born.

But then, Jesus could not have lived to bring the light of the divine to the world.

Mary, may have been happy, with how things turned out. Jesus, basically, told Pilate to go screw himself, and they killed His body but not His Spirit. Turns out they couldn't kill Him. The spirits of Jesus and Mary live on in the stories we tell about them. You got to admit they were really something and continue to be as they enrich our lives year after year.

The focus of the story is on the birth of the baby, Jesus. But none of this would have been possible without Mary. Mary is the conduit of the divine coming into the world once again. Without Mary, Jesus, would not have been born. Is Mary the best supporting actress in this drama or is she the star of the show? Depends on your focus and how you tell the story. While I like Jesus, there are times I like Mary better. Mother Mary, the Mother of our remembrance of the divine in the world. She knew what God was up to and she said, "Yes!" Wow!
Posted by David G. Markham at 11:17 AM