Fourth week of Lent. "If God is with me who can be against me?" 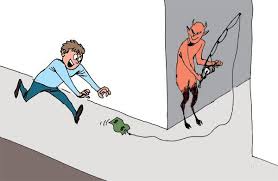 It is written in Luke 4:
4 And Jesus, full of the Holy Spirit, returned from the Jordan and was led by the Spirit in the wilderness 2 for forty days, being tempted by the devil. And he ate nothing during those days. And when they were ended, he was hungry. 3 The devil said to him, “If you are the Son of God, command this stone to become bread.” 4 And Jesus answered him, “It is written, ‘Man shall not live by bread alone.’” 5 And the devil took him up and showed him all the kingdoms of the world in a moment of time,6 and said to him, “To you I will give all this authority and their glory, for it has been delivered to me, and I give it to whom I will. 7 If you, then, will worship me, it will all be yours.” 8 And Jesus answered him, “It is written,
“‘You shall worship the Lord your God,
and him only shall you serve.’”
9 And he took him to Jerusalem and set him on the pinnacle of the temple and said to him, “If you are the Son of God, throw yourself down from here, 10 for it is written,
“‘He will command his angels concerning you,
to guard you,’
11 and
“‘On their hands they will bear you up,
lest you strike your foot against a stone.’”
12 And Jesus answered him, “It is said, ‘You shall not put the Lord your God to the test.’” 13 And when the devil had ended every temptation, he departed from him until an opportune time.
Here we are in the fourth week of Lent and as we are purifying our hearts and minds we consider the temptations that Jesus was challenged by.
Jesus was hungry and the devil mocks Him and tells him to turn the stones in bread. And Jesus, to be blunt, tells the devil to fuck off. As Jesus tells the devil to fuck off he laughs kind heartedly and says, "You dumb bastard, don't you know that there are more important things in life than food? Whoppers, Big Macs, a Dave's special mushroom, swiss, bacon burger don't do it for me. I am hungering after bigger and better things."
So the devil says, "Make a YouTube video and I will see to it that it goes viral and you will have all the fame and fortune of Donald Trump." And Jesus says to the devil, " I don't give a shit about the fame and fortune of Donald Trump. In order to achieve that I would have to lie, and cheat, and steal, and fill people with fears of each other and even if I could become President of the United States and be known all over the world, I would not sell my soul to you to have such a thing. It would be my idea of hell to be caught in such a web of surveillance and political expectations.
So the devil says to Jesus, "Why don't you do something really stupid like jump off the Golden Gate bridge at noon and instead of killing yourself, you will fly like a bird and people will be utterly amazed at your Super Power abilities and they will make comic books, and movies, and toys depicting you for children to play with for 7 generations." And Jesus says to the devil, "You're kidding me, right? I know that God loves me unconditionally and when God is with me and I am with God who can be against me? Bringing my will into alignment with God's will for me gives me all the super powers I, or anyone, will ever need."
And the devil gave up on tempting Jesus. The devil could see that Jesus no longer was walking on the path of the ego, but had embarked on the path of the spirit and that was a road the devil didn't want to go down.
Posted by David G. Markham at 7:00 AM