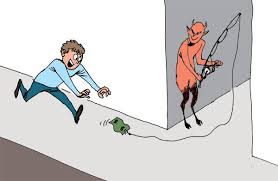 People who are awakened go on living in the world. While they live primarily on the path of the spirit, things on the path of ego still challenge them. It is kind of like an addict with cravings. Even though the addict has given up the substance(s) of choice, still there are times when cravings arise and triggers appear.

The idea that being awakened, enlightened, is continual bliss is inaccurate. At times the bliss is threatened and the awakened person must remind him/herself of the chosen path they are on. Being in an awakened state is a continual choice and while it becomes more "natural" and "normal" it is at times threatened.

Awakened and enlightened people continue their spiritual practices because they give them joy and fulfillment. When their equanimity is threatened, awakened people maintain their equilibrium, their balance, with mindfulness and meditation.

Jesus and Buddha were often challenged by the egoistic forces that surrounded them. They were often put to the test. The tests are not significant, but the ways of managing the tests are. Remembering who we are, and what we are, returns us to stability.

The tests to the genuineness of awakening are ongoing and are met with grace and blessings from the Divine source which is the ground of being. What this takes is awareness and intention to surrender to Love.

Email ThisBlogThis!Share to TwitterShare to FacebookShare to Pinterest
Labels: awakening