Is the chalice fire an antidote to Trumpism? 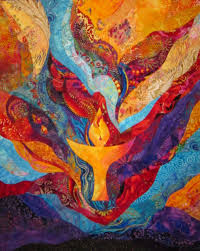 This is the first article in a series on "Individual And Social Factors Which Support Trumpsim." It is fascinating not that Donald Trump, "The Donald," got elected President of the United States, but that citizens actually voted for him to become their President. Who are these people? What made them do it?

As these questions have been studied, "Who are these people who voted for Donald Trump," and "What made them do it," answers have been discovered and rather than view these answers through a poltical, psychological, and sociological lens alone, the articles on this topic published here will also look at the spiritual dimension.

The first reason that people have voted for The Donald could be construed as cynical and practical. These voters wanted, on a practical level, what Donald was promising: tax cuts for his 1% bank rollers, and jobs for the working class. These folks were willing to make a bargain with the Devil to get what they wanted. These folks are described as the Republican Party which got in line in the House of Representatives, the Senate, and GOP headquarters hoping to ride Trump's coat tails.

Trump did deliver on the tax cuts to his rich supporters but he has not improved things for his working and middle class supporters and the GOP, especially after the mid terms are growing increasingly disenchanted.

While the deal with the Devil has worked well enriching the 1%, the deficit is at a record high which our children and grandchildren and perhaps elders, if their social security and Medicare benefits are cut, will have to address. The failure to provide jobs is based more on the awareness that Trump's promises were a charade because the loss of jobs may not have been due as much to the globalization of the economy as automation and increased reliance on AI (Artificial Intelligence).

The spiritual lessons from acting on these practical incentives for electing Trump is that we have ignored the basic principles of justice, equity, and compassion at our peril. Further, there has been an impervious ignoring of the interdependent web of existence - in other words, "robbing Peter to pay Paul" is not a long term viable strategy, and pain has been inflicted on multitudes of people for the benefits of small minorities which impoverishes the social fabric.

Unitarian Univeralist principles are an antidote to Trumpism. They are the balm, the medicine, for the sickness of spirit present in a cynical and mean spirited society. In the darkness which has befallen our nation and the world, a flaming chalice of love, truth, beauty, and goodness can light the way.

Editor's note: This is article #1 in a series on the spiritual antidote to Trumpism
Posted by David G. Markham at 11:14 AM

Email ThisBlogThis!Share to TwitterShare to FacebookShare to Pinterest
Labels: Antidote to Trumpism