What is an example of what the interdependent web of existence looks like? 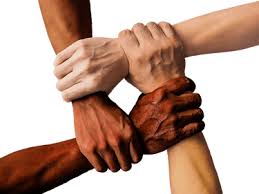 The idea of rugged individualism is a myth pernicious in its consquences tearing the social fabric assunder. The idea that a single individual can pull him/herself up by his/her own boot straps is an illusion. We all need help whether we recognize it or not, acknowledge it or not, appeciate it and are grateful or not.
Here is a quote from Elizabeth Warren which appeared in the Sunbeams section of the November, 2018 issue of The Sun magazine.
"There is nobody in this country who got rich on his own.
Nobody.
You built a factory out there — good for you.
But I want to be clear:
you moved your goods to market on roads the rest of us paid for;
you hired workers the rest of us paid to educate;
you were safe in your factory because of police forces and fire forces that the rest of us paid for. . . .
Now, look. You built a factory and it turned into something terrific, or [you had] a great idea? God bless! Keep a hunk of it.
But part of the underlying social contract is you take a big hunk of that and pay forward for the next kid who comes along."
Elizabeth Warren
From The Sun, November, 2018